Last Saturday was something of a microcosm of Pitt Kicker Alex Kessman’s collegiate career. It was filled with frustrating misses, a jaw-dropping bomb, and a truly head-scratching shank. No one will look at Kessman’s line and argue he had a good day. He was 1 for 3 on Field Goal Attempts and 3 for 4 on PATs. That’s 7 points that could have, and arguably should have, been on the scoreboard. While Kessman was not the only reason Pitt lost to the Eagles, it’s hard not to draw a direct line between his misses and the Panthers losing the game by one point. The most obvious example being the missed PAT that ended the game when it appeared that Pitt had forced a 2nd overtime period. Yet, we wouldn’t even be talking about that, shall we say, unique way to lose a game if not for Kessman himself. Towards the end of regulation, it was his 58-yarder that tied the game and gave the Panthers a shot at pulling out a win in the first place. A kick by the way that set the school record for longest made Field Goal. Normally, a kicker that forces overtime on a record-breaking kick would likely be on the shortlist for a conference Specialist of the Week honor. However, a kicker with the line given above should never be considered. So it has seemed to always be with Kessman. He is an enigma that will likely see his career conclude with his name all over the Pitt record books, but will likely never be thought of as a great placekicker.

The enigma of Kessman is something that I’ve noticed, and I’m sure many have also seen, prior to this season. He will botch seemingly easy kicks at a frustratingly high rate, but will hit clutch long kicks with regularity rarely seen in college kickers. As a Freshman in 2017 he tied the school record for longest made Field Goal with a 56-yarder against Syracuse. The same kick also broke the record for the longest in the Carrier Dome’s history. That week he was also named the ACC Specialist of the Week. However, that one game came in the midst of a rough first season as Pitt’s placekicker. Overall, he only converted 58% of his Field Goal attempts that season, well below the FBS average of 73% that season. He had much better luck his Sophomore year as he went 4 for 5 from kicks beyond 50 yards and converted 76% of his overall field goal attempts. This would be his only season so far where he finished above the FBS average (74% that year). However, he only converted half of his attempts from the 30-39 yard range. It was sometime during this season that I first observed this “enigma” where he was seemingly more reliable from longer distances.

This contradiction was not very pronounced last season. His completion percentage actually declined or held steady as the distance increased. While this is what should be expected, that was actually the only season of his career where it was the case. However, his 50% mark from beyond 50 yards was still above the FBS average of 48%, while his overall percentage of 71% was less than the overall FBS percentage of 75%. As we approach the halfway point in the 2020 season though, it appears as though Kessman’s inconsistency has returned. While he now solely owns the school record for longest completed Field Goal, he is also hitting only 58% of his attempts. This is well below the FBS average of 73%. As evidenced by the chart below, Kessman has generally been a below average kicker, typically making kicks at a rate below the FBS average. 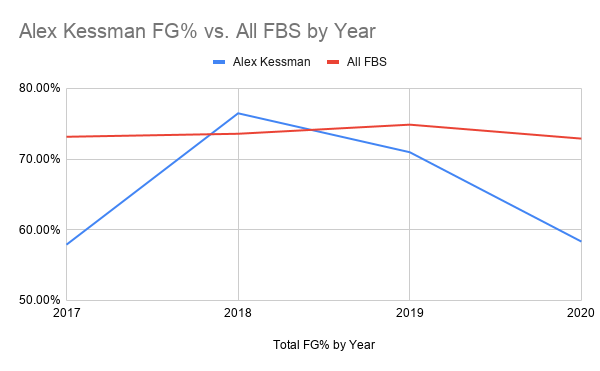 As has already been detailed above, the frustrating thing about Kessman is how strong his leg is given his history of successfully converting long kicks. I’ve long had suspicions that Kessman’s numbers are better for longer kicks than those that are closer in, but I’ve never actually collected and analyzed the data. Well I have now and the chart below was pretty shocking even based on what I was expecting. The graph looks at how the success rate of kicks drops as they get longer. I’ve included PATs and made them the shortest kick because, even though they are technically a 20-yard attempt and therefore within the 0-29 bucket, Field Goal attempts from that distance or closer are rare. 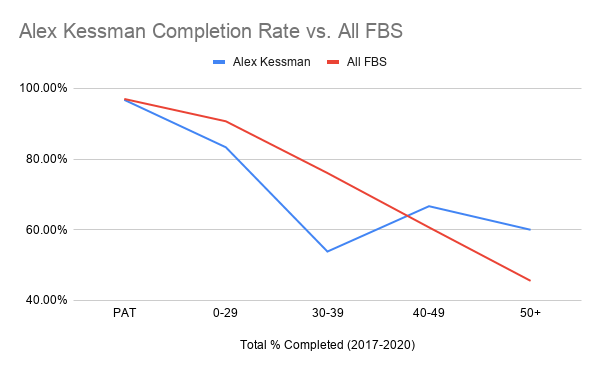