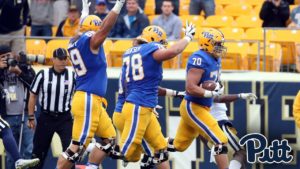 Look out! The University of Pittsburgh Men’s Basketball and Football programs both have Top 20 Recruiting classes for the 2020 season!!

Thats right Pitt fans the talent is coming, and the hard recruiting work is starting to pay off. In a very tough ACC Conference Coach Capel and Coach Narduzzi are finding the talent. More importantly they are building their programs the way they said they going to. The Coaches said they were going to go after the talent, and they are. Crazy thing is happening…the talent is coming! Stop the press!

For example, with William Jeffress coming to Pitt to play basketball next year, it’s the first time since 2009(DeJuan Blair) that the PA POY committed to Pitt. The Peterson Event Center is becoming a destination for kids to play. The Oakland Zoo will once again frighten opponents.

The Football team has players coming back to play for a 5th year! Even a 6th year! Pitt is putting guys in the NFL  Maybe not the way Alabama is, but when Pitt does, it’s names like Donald, Revis, Fitz! HOFers!!  I would look to see more Pitt players in NFL in this near future. Names like Twyman, Paris, Pickett!

These incoming recruits, upon signing and being interviewed, shared the same sentiment about the head coaches that recruited them. They were excellent communicators. Developed a relationship early on in high school, and gave unwaivering support throughout. They felt the family atmosphere immediately when they visited. Knew that The University of Pittsburgh was the place they wanted to be.

That’s the Pitt that I want to be part of!