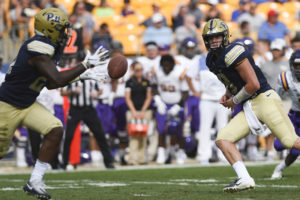 It was a warm-up game that so was so warm, well it was a scorcher on the field. Some say over 90 degrees at times.

It didn’t effect the machine-like, first-half precision of Pitt’s sophomore QB Kenny Pickett, though, who threw for 154 yards on 16 for 22 passing, 2 TDs and 1 INT. Yet, it yielded the desired result. Pitt dismantled under-manned Albany 33-7 in front of an announced crowd of 34,486 at Heinz Field in Pittsburgh.

It all started when Albany kicked off. That’s when Pitt’s junior WR from New Brunswick, NJ Maurice Ffrench decided to return the rock 91 yards to paydirt on the opening kick. Pitt led 7-0.

Albany countered with Sr QB Vincent Testaverde, son of NJ Jets QB Vinny Testaverde, finding a wide-open Jerah Reeves for 37 yards to the Pitt 43. Testaverde then found true freshman WR from Troy, NY Dev Holmes for 17 yards to the Pitt 31. Pitt’s safeties once again appeared out of position mainly because Pitt was playing in a base defense against a spread offense.

Newark, NJ’s RB Elijah Ibitokun-Hanks ran for 6 yards and the Great Danes eventually got down to the Pitt 19. This led to Testaverde throwing a ball up for grabs that was eventually plucked out of the air by free safety junior Damar Hamlin who returned it 79 yds to the Albany 19 yard line.

Pitt would take back over on offense and senior tailback Qadree Ollison took 2 successive handoffs for 8 and 6 yards to the Albany 5 yard line. Pickett