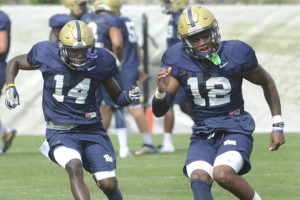 There’s been a lot of experts, pundits, media and fans that have studied the Pitt Panthers defense over the past 3 seasons under Head Coach Pat Narduzzi. In almost all of these cases, the focus and perhaps blame for their dismal performance has been squarely placed on the shoulders of the Pitt secondary. The logic goes something like this: the Pitt defense surrendered an average of 254 yards per game last season (2017) and more specifically the Pitt secondary simply couldn’t handle the man-to-man coverages assigned by former Pitt DC, Josh Conklin. The year before it was roughly 332 yards per game to even further cement the point.

But in reality, that has not been the true culprit of Pitt’s defensive woes.

Pitt’s defense has been the victim of one massive flaw: a non-existent pass rush. Think of this, Pitt only recorded 23 sacks all season last year. Aaron Donald alone recorded 29.5 sacks in his 4 seasons at Pitt and that was from the DT position (by one player) by comparison. The leading sack specialist last year for Pitt was Sean Idowu with a whopping 5 sacks from his Star LB spot.

That’s right, both starting defensive ends Rashad Weaver and Dewayne Hendrix recorded a mere 3 sacks each for the entire season. Pitt legendary LB Hugh Green used to sometimes record 3 sacks a series in some games it seemed in 1980, if memory serves.

So despite all of this talk, criticism and focus on the Pitt secondary, the truth is even former Pittsburgh Steeler and NFL Hall of Famer Mel Blount in his prime couldn’t cover receivers with that much time. If you watch the tape from last season, Pitt opponents averaged over 7 seconds per pass attempt on 5 step drops or greater. This means, when opposing QBs were in obvious passing downs and distance, they basically had all day to throw. That number should be no greater than 5 seconds on average.

The only way Pitt mustered any sort of pass rush at all was to blitz. To their credit, Pitt blitzed often from