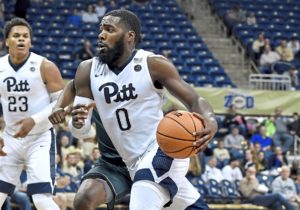 Late Tuesday night Pitt was defeated by Syracuse, 59-45. The Panthers kept the game close until the final minutes where Syracuse took control and ran away with the game. Pittsburgh is now (8-11, 0-6). In this low scoring game there are few things, both good and bad, we can take away from this game.

The freshman from Union City, TN was the reason the Panthers were ever competitive in the game. Stewart finished with a career-high 23 points, outscoring the rest of the Panthers, who combined for 22 points. Parker made, eight of his 14 shots and seven of his 13 3-pointers. Whenever it seemed the Orange were pulling away a Stewart 3-pointer would shock the crowd. Stewart began to get the hot hand at the start of ACC play where he is shooting 48 percent from the 3-point line and averaging 14.8 points per game. Pitt needed a player like Stewart to pickup their scoring with Luther’s absence. Stewart gives Pitt fans hope to see his play develop this year and encouragement for him to be a leading scoring in the ACC next year.

Struggle against the 2-3 zone

The main reason Pitt struggled to score was the famous Syracuse 2-3 zone. Must possessions involved them moving the ball around the 3-point line or passing it to the foul line only to be kicked back out. Pitt was clearly missing a high post game. Terrell Brown couldn’t find his shot from the high post, only scoring six points down low. Ryan Luther, who is now out for the year, could have helped pick apart the zone defense. Luther’s excellent high post game could have created passes to open Panthers either down low or out for a 3-pointer.

While Stewart had a career game against the zone, freshmen Marcus Carr and Shamiel Stevenson struggled greatly. Carr is a player that creates opportunities from penetration. It was hard for Carr to breach the zone and get to the rim. Carr was in foul trouble early, only playing 19 minutes and finishing with only two points coming from the foul line. Stevenson also struggled to find much playing time. Kevin Stallings decided to go will a tall starting lineup, starting both Brown and Chukwuka for the first time. It seemed Stevenson’s size against a lengthily Syracuse team was the reason for his struggle.