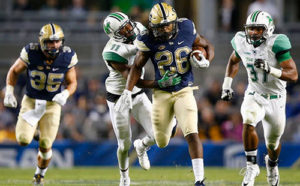 Pitt completed its non-conference schedule on Saturday with a 43-27 win over visiting Marshall. While the win lifted the Panthers to a 3-2 record (0-1 in the ACC), the result itself was much closer than it should have been.

The first half was all Pitt.

After Conner added another yard, sophomore Panther WR Quadree Henderson ran a jet sweep for 7 yards. Conner then tacked on 4 more yards and this set up Peterman finding Henderson on a curl route for 17 yards down to the Marshall 5 yard line.

The Pitt defense looked sharp in the first half and stopped the Thundering Herd on all 6 of its drives.

On the Panthers second drive, Conner rumbled for 12 yards to the Pitt 29 yard line. Peterman then connected with Weah for 23 yards before finding senior H-Back Jaymar Parrish for 8 yards.

Then it was time for Henderson to steal the spotlight. First he nearly broke a big one but was stopped for a short 2 yard gain. He didn’t waste his second jet sweep handoff. He outran the Marshall secondary for 34 yards. Conner salted the drive with runs of 3 yards and a 1 yard TD. Pitt led Marshall 13-0.

Marshall punted again and then it was time for Pitt to showcase its newest true freshman tailback phenom, Chawntez Moss.

Moss scampered up the middle, breaking tackles in dramatic fashion, for 41 yards like a blast out of a canon. Peterman then missed Weah on a slant pattern, but Moss took his second hand-off for 21 more yards to the Thundering Herd 34 yard line.

Peterman then found Aston for an 11 yard pass and this led to a 12 yard facemask penalty by Marshall’s Rodney Allen.

Marshall punted again and Pitt drove 10 plays for 51 yards to the Thundering Herd 1 yard line on its next series. However, the Panthers were stopped on 4th and goal from the 1 yard line when Peterman tried a QB sneak play.

The Thundering Herd punted again and Pitt would score on its final drive of the first half.

Moss first ran for 7 yards off-tackle and then was stopped for no gain. Weah then caught a Peterman pass for 6 yards followed by Pitt senior TE Scott Orndoff’s 20 yard reception on a beautifully thrown ball.

Although Peterman misconnected with Weah on the next snap, Marshall’s Chris Jackson was flagged for a 15 yard pass interference call.

Peterman then went right back to his favorite target of the night, Weah, for 17 yards before Moss added another yard to inch closer at the Marshall 15 yard line.

Peterman concluded the drive by finding redshirt freshman WR Tre Tipton for a 15 yard TD strike. Pitt led at half, 27-0, over Marshall.

The Pitt defense then wilted under cushion of a large halftime lead. The Panthers surrendered two straight 2 TDs to the Thundering Herd, mainly on the heels of broken assignments, missed tackles and one and one coverage downfield.

Pitt would though add a 20 yard Blewitt field goal at the end of the 3rd quarter. Pitt 30 Marshall 14.

Marshall would once again abuse the Pitt secondary for 2 more touches for many of the same reasons as the 2 previous games and most of the 2nd half. Pitt’s big lead evaporated just like that. Pitt 30 Marshall 27.

The final offensive drive for the Panthers this time though was far more fruitful than the previous 2 games.

Peterman handed off another jet sweep to Henderson for 6 yards before nearly getting sacked and losing a yard on a pass to Weah.

This led to the game’s deciding plays. Peterman somehow whistled a 9 yard pass to Orndoff on 3rd and 6 and the ball was miraculously caught.

With a new set of downs, Aston ran for 4 yards and Moss for 3 more before Pitt’s game-winning play would take place.

Peterman dropped back and tossed a jump-ball to Weah, who somehow outstretched