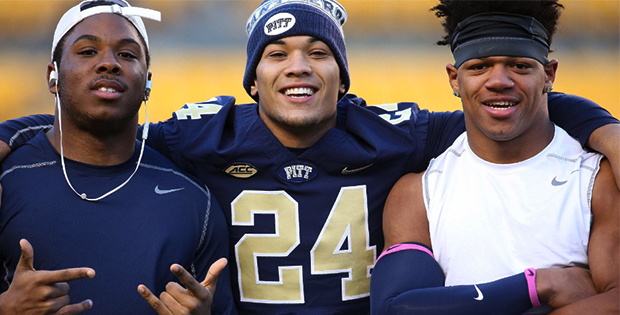 Pitt Football begins Season #2 under Head Coach Pat Narduzzi tomorrow starting with Summer Camp. For a team that started strong (8-3) and ended weak (lost season finale home vs Miami and the Military Bowl against Navy), Pitt has certain holes to fill. Most notably, the losses of Pitt’s all-time greatest WR (in terms of production) Tyler Boyd (who was taken in the 2nd round of the NFL draft this past April) and TE JP Holtz (who is trying to earn a roster spot with the Cleveland Browns) will be tough shoes to fill.

But the bigger story is what will happen on defense. Pitt got torched by faster offenses last year and faces the likes of Oklahoma State, Marshall and Clemson this season. Team speed will be a necessary upgrade on defense.

Offensively, Pitt has an experienced massive Offensive Line and a bevy of talented tailbacks. Pitt will attempt to control the clock and maul people this season.

So we begin our preview of the 2016 Pitt Football Season with our position by position outlook:

QB – Returning 5th year starter Nate Peterman will be the starter. Last season (2015), he completed 193 passes on 314 attempts with 20 TDs, 8 INTs and a 138 QB rating. His issues seem to be rooted in staring down receivers especially Tyler Boyd. His mechanics are solid but he still needs some work on shortening his wind-up release and getting the ball out quicker.

After Adam Bertke transferred in the off-season, the back-up job seems to be in the hands of Former NC State and UT-Martin QB Manny Stocker (his younger brother Jay plays safety for Pitt). Stocker is mobile and really knows Pitt’s new Offensive Coordinator Matt Canada’s system pretty well from their 2013 season together at NC State.

Behind Peterman and Stocker will be redshirt freshman Ben DiNucci, who has an unorthodox release but also has an uncanny feel for the game, and true freshman Thomas