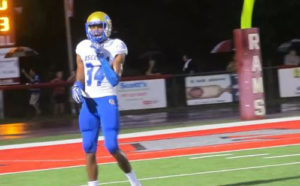 Coach Pat Narduzzi and company are working to establish the secondary for the coming years and recently an offer has been extended to a 2016 Defensive Back in the Sunshine State. Carlos Becker (6’3” 180 lbs.) of Osceola High School is the recipient of that scholarship offer. During his junior year, Becker was responsible for fifty plus tackles, a few interceptions and fifteen pass break ups.

Dreambackfield.com caught up with Becker to discuss his thoughts on the offer and Pitt.

“The offer came out of nowhere to be honest,” said Becker. “A coach told me that he liked my film and that I would fit at Pitt.”

Becker is aware that Coach Narduzzi was successful during his tenure at Michigan State, where his defenses were near the top year after year.

This past season, Osceola High School went 13-2 and 6-0 in their district. Becker’s play was a major role in their success. He consistently locked down receivers and was very physical. According to Becker, his coverage is his biggest strength. “I never used to like man press until I started going to 7-on-7s then I started to like it because I have long arms.”

As a junior, Becker was an All-County player but he is using the spring and summer to get bigger and faster. He also wants to get his GPA and SAT scores up.