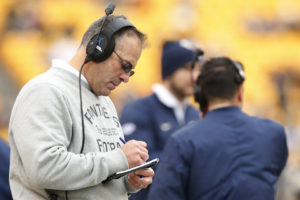 Pat Narduzzi and the Pitt athletic department find themselves in an arena filled with other programs that face the near-yearly task of replacing an offensive coordinator.

Jim Chaney was a bust with the talent at his disposal and to the opposite end of the spectrum, Matt Canada was the closest thing to “Touchdown Jesus” the program has seen when not trekking to Notre Dame.

Canada not only raised the scoring potential of the team by two touchdowns, but also raised the stakes for Narduzzi and the search firm that are scouring the country for potential replacements.

To find the good in his departure was hard to find at times, but like a snowy day in Erie, you have to dig deep to find what you are searching for

Pitt could end as the beneficiary of an LSU contract just north of a million dollars.

Pitt’s offense will be surrendering plenty of talent to the NFL, such as: James Conner, Adam Bisnowaty, Dorian Johnson, Nate Peterman and Scott Orndoff. Each played their respective positions above and beyond expectations.

Young talent is all over the future roster. Quadree Henderson, Aaron Mathews, Chawntez Moss, Chris Clark, Thomas MacVittie and now, Max Browne, who is transferring to Pitt from the sun-bathed Trojans of Southern California.

The offensive line will lack overall experience but the potential is exciting with their size and speed for the position. With John Peterson guiding the ship, development should be far from a concern.

So how does this entice another offensive coordinator and benefit Pitt at the same time?

Raw talent without a true identity.

An offensive coordinator without a true identity themselves should again be at the top of the wish-list for Pat Narduzzi. It worked with Matt