After a hot start to the beginning of game, it appeared Pitt might finally get their first conference win. However, after being up 15 points late in the first, the Panthers lost to Boston College 81-58.  Pittsburgh’s losing streak is now at 14 games and they are 8-19 (0-14) for the season.

After the first 15 minutes of the game the Panthers were up 15 points and Boston College’s best player, Jerome Robinson, was on the bench in foul trouble. After his performances last week, Robinson was name ACC player of the week. Robinson sat the final seven minutes of the half with only two points. Pitt went over five minutes without a point and BC cut the score to 34-32 at halftime.

Going into intermission with a two point lead it was obvious Boston College was taking over the game and appeared they wanted to win more. During halftime it was up to Coach Stallings to rally his team to come out and win against an ACC opponent for the first time. Instead the Panthers were completely embarrassed on both sides of the court. Pitt struggled to only score 24 points in the second half while giving up 49 points. Jerome Robinson finished with 27 points and outscored Pitt 25-24 in the second half. 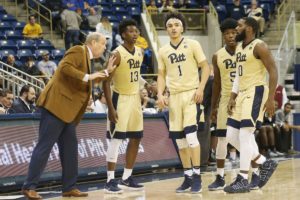 In the final month of the season it appeared Pitt had only two real chances of winning. Tonight against BC and next week against Wake Forest. Both home games and against teams at the bottom of the ACC standings. Wake Forest is a weak opponent and the Panthers will have another chance at home next week. However, this season the Peterson Events Center has offered zero home field advantage and it’s likely the crowd deflates the motivation of the Panthers. This was a game were fans thought they’d see the several freshmen excel. Instead, they collapsed and regressed with a double digit lead at home.