In one of their most competitive (and easiest) conference games all season, Pitt (8-21, 0-16) loses to Wake Forest 63-57. The attendance for tonight’s game was 2,420, the lowest ever for a conference game at the Peterson Events Center. Jared Wilson-Frame and Marcus Carr each scored 11 points for the Panthers.

The Panthers went into halftime with a one point lead. Starting the second half, Pitt continued their theme of the season, long scoring droughts. Down six and with more than five minutes gone the Panthers got their first basketball of the second half. 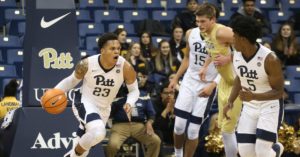 In the last minute it looked like Pitt had a chance to extend the game to overtime. Trailing by three with less than a minute, Pitt freshman Marcus Carr had the ball, but for too long. He dribbled around the top of the key and finally passed it with less than 10 seconds on the shot clock. Shamiel Stevenson was fouled and made one of two from the line. Down 4 with 15 seconds left, the Panthers quickly pushed the ball up the court and Jared Wilson-Frame missed a wide open dunk sealing the game for Wake Forest.

After tonight’s loss to Wake Forest, it’s likely Pitt will finish the season with zero conferences wins. Tonight was Pitt’s best chance against an ACC team, Wake Forest (11-17, 4-12) is at the bottom of the ACC standings just above Pittsburgh. The Deacons are 5 -66 on the road in the ACC in their last 71 games and have never won a game in Pittsburgh (0-9 in school history). This was Wake Forest’s first conference road win of the season. Wake Forest was a 10 point favorite coming into tonight’s game, their highest mark since being favored by 16.5 against Quinnipiac on November 18.

The Panthers will host Virginia, the #1 team in the nation.