Coming into this season most Pitt fans knew this was going to be an ugly season. After watching this awful season, a lot of Pitt fans are calling for Coach Kevin Stallings to be fired. However, Pitt fans don’t seem to realize that we need him if the Panthers want to be competitive anytime soon. Pittsburgh is in a rebuilding period and it won’t happen over night. Firing Stallings will only make the situation worse. Pitt fans need to stop complaining about Stallings and start supporting the team. 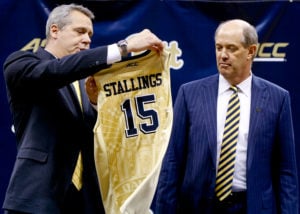 Immediately after Stallings’ hiring it was clear a large part of the fan base was unhappy. The group of haters only grew last year and is out of control this year. It has become an embarrassing trend this year for the fans to boo Stallings during his introduction. If Pitt was actually going to fire Stallings, why would any coach come here after seeing that?

One main reason Pitt fans should start supporting Stallings is because it’s not all his fault. A lot of the blame can go to Jamie Dixon. The Panthers’ former coach left this team in terrible shape for any coach. The best coaches today would have a similar record with this roster. After joining the ACC, it was easy to see the decline of Pitt basketball with Dixon coaching. A lot of it had to do with the players he recruited. In his final three seasons at Pitt, Dixon’s classes were ranked 87th, 80th, 112th. No surprise those classes were also ranked at the bottom of the ACC. The only player remaining from those classes is Ryan Luther. Panther fans went into panic mode when a majority of Pitt players transferred last year. Now, those players are on teams like Old Dominion, Portland and South Alabama. The only player Pitt wanted to keep was Cam Johnson, who left for North Carolina. Before Dixon’s departure, Cam Johnson planned to graduate early and leave Pitt for another program. Stallings knew he couldn’t win with the players that Dixon brought in, so he ran them out of town to bring in better players. Dixon wasn’t a fan of joining the ACC and he wasn’t a fan of recruiting