Is PITT Football now the closest they have been to building an on-campus stadium in decades?

Well, ok, not really, but I’m sure that question caught your attention and got your excitement up because it needs to happen, according to most PITT fans when you ask them.  But, there are no signs of it happening in the near future, but I will lay out a few reasons why it may be getting close to happening and why the fan base has a major role to play in it.

The first reason I have starts at the top and that is AD Heather Lyke and Head Coach Pat Narduzzi.  Ever since Day 1 when Narduzzi got here, he has changed the culture of the PITT football program and the momentum has continued to grow each season.  And add Heather Lyke to the mix who understood at Eastern Michigan that you need the facilities to attract the top coaches and players to your program.  With the leadership of Narduzzi, Lyke and Chancellor Gallagher, I believe for the 1st time in a long time, PITT has the leadership at the top that would bring football back to Oakland.

And the next reason I am going to make kind of ties into the leadership.  As a couple weeks ago PITT Athletics received the single-largest contribution to the PITT Football Championship fund with Steven and Kathy Guttman donating $2 million.  This just goes to show you that PITT alumni and fans are finally starting to buy back in to the athletics program and there are businesses and families out there willing to donate to take the program to the next level.

But, before I get into the two proposed locations that I came up with to build a stadium in Oakland. I need to air some grievances I have in relation to attendance at PITT football games.  Now, throw out whenever PITT plays Notre Dame, West Virginia, Penn State or any other big football event because Heinz Field is packed for all those events.  If you want the athletics administration to take your calls for an on-campus stadium seriously, than you have to show that you care about the program.  And by that last sentence, I mean show up to the games and get on average 60,000 into that stadium for home games.

Now, if your not a tailgater or don’t want to drive down to the North Shore than you always have the option of taking the “T” down to the game and hanging out at Tequila Cowboy, Bettis’, Southern Tier, Tilted Kilt, Burgatory and any of the other bars down by the stadium.  Heinz Field and the North Shore has the potential to be a go to location on college football Saturday’s and by making it a go to place will also continue the PITT athletics program growth under the current administration.

Now, I am going to squash the hopes of many people who call into radio stations and post on social media that they should be a stadium down in Panther Hollow by saying that will not happen because they do not want to build anything there.  In my opinion, I think PITT wants to add more green space to their campus before they take any away.

But, I think there is a compromise to be had with those people by throwing this idea out there.  And here it is: 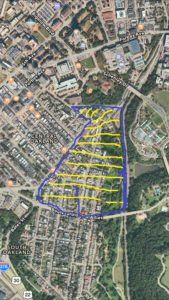 Now, it isn’t in Panther Hollow, but my proposed location #1 is right next to Panther Hollow.  And what I think would be cool is having the Cathedral of Learning as the backdrop for one of the endzones.

And here is my 2nd proposed location for an on campus football stadium in Oakland with the Cathedral as an endzone backdrop. Instead of the Boulevard of the Allies as a point of reference, this time the stadium just runs parallel to Forbes and Fifth Avenue. 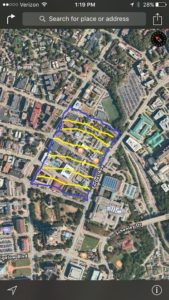 Now, originally had my proposed second location in a bigger space, but then I realized Central Catholic High School is right there and had to cut it half.