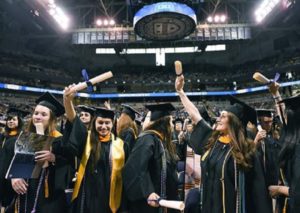 Pitt Football has had a long history of football attendance woes. Even during the height of Pitt’s success in the modern football era (1975-1983), Pitt Football paled in comparison to many other comparable city schools. And this was during a time when Pitt played football “on campus” at Pitt Stadium. In fact, the best Pitt football could average during that time period was in 1982: a mere 55K.

These days, Pitt barely gets 55K in any game unless its a special event (Florida State in 2013 for Pitt’s first-ever ACC game) or when a traditional rival – Notre Dame, West Virginia (series renewed for 4 games between 2022 and 2025) and last season of course, Penn State – is in town.

Pitt fans will continue to lament about the move in 2001 to Heinz Field, the much maligned off-campus NFL stadium that is truly the home to the Pittsburgh Steelers moreso than the Pitt Panthers. It simply doesn’t feel like college football. So Pitt fans have the “go to” move to bash the move to this sterile off-campus facility as the culprit.

The “problem” however goes deeper than that. When you look at the composite of the Pitt fan base, it’s mainly an aging fanbase. A simple eyecheck and some Pitt insiders also admit to DreamBackfield that most of the Pitt Football “diehards” are male, white, over 30 and live within 5-7 hours of Western PA. Its not a national fanbase by any stretch or diverse.

That said, in order to grow a fanbase, you need youth and you need Pitt alumni who care. Youth and alumni? Well, who are they?

Therein lies where the hidden