While watching the NCAA Frozen Four Tournament on ESPNU over the past week, it got me thinking about expanding athletics at PITT by 1 or 2 sports.  And with hockey you could add a men’s and women’s team.

PITT already has a club hockey team that is a member of the ACHA and they made their first ever trip to Nationals before losing in OT to Oklahoma this season.

But imagine them in the Atlantic Hockey Conference (AHC) with Robert Morris. Then, just imagine playing Penn State in a home and home every season in hockey and just the atmosphere that there would be at that game and every hockey game for that matter.

The more and more I think about it, the more and more I want it to happen.  Yes, the one thing that is missing is probably the money, but imagine saying you would play Penn State and Robert Morris every year. You would be able to raise funds to help start an NCAA Hockey program.

We will get back to the men’s team in a minute, but with hockey you would be able to add a second new team to the Athletics department and that would be a women’s hockey team.

The Women would not be in the same conference as the men by name, but they would probably be a part of College Hockey America (CHA) conference with team’s like Robert Morris, Penn State, Mercyhurst and Syracuse.

Hockey is a big part of Southwestern Pennsylvania and just imagine if the Power 5 University in the city had a men’s and women’s hockey program. The sport would continue to grow in the region and hockey prospects will continue coming out of this region and probably would be more likely to stay home.

Now, onto the next question that I know people will ask when reading this. Where will they build an arena on campus or in the city? Well, the first option can’t happen because they missed that opportunity back when the Petersen Events Center was being built. As I was discussing with 93.7 The Fan Host Tab Douglas last week, PITT missed the boat when they could of made “The Pete” a multi-purpose arena for Basketball, Wrestling and Hockey.  So now it becomes a little more complicated.

In the photo below, you will see my proposed location where PITT could build a hockey arena and continue to add to the campus in Oakland. Here it is: 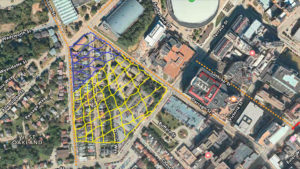