Pat Narduzzi has put together a very solid 2017 recruiting class. There were plenty of misses, which happens with any team in college football, but also some pleasant signing day surprises. Here I will rank all the incoming players brought in during the #SteelCity17 Campaign. 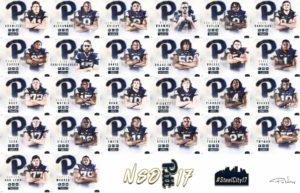 Ford was arguably the top WPIAL recruit, and ESPN considered him the #2 prospect in all of Pennsylvania behind Philadelphia area RB DeAndre Swift (Georgia Commit). Ford was recognized as an Under Armour All-American, and had an incredible game down in Florida against the top High School competition in the country. Ford will be an immediate contributor for the Panthers and I expect him to be the opening day starter when Pitt lines up against Youngstown State. Ford is a do it all player with excellent ball skills, and can play a “Center Field” style, sideline to sideline safety. His ability to roam the entire field will allow fellow Safety Jordan Whitehead to play up on the line of scrimmage in run support, capitalizing on his athleticism.

Browne is now in line to become the Panthers 3rd consecutive starting QB to transfer into the program – after Tom Savage (Rutgers/Arizona), and Nathan Peterman (Tennessee). Browne started 3 games for the Trojans this year before ebbing replaced by Freshman sensation Sam Darnold, who would lead the Trojans to a thrilling Rose Bowl victory over Penn State. Browne is a natural leader, being elected team captain by his teammates at USC. He is a former 5 star recruit and top ranked Pocket Passer by ESPN. I expect Browne to learn the offense quickly from whomever takes the reigns as Offensive Coordinator. He has excellent pocket presence, and has good to very good accuracy and am strength. I expect Browne to lead the Panthers to an 8-10 win season.

It was hard to rank Davis