You read that right. Pitt beat Syracuse today 76-61. Not in hoops but football. It was the highest scoring game ever in FBS history. The victory lifted Pitt to a 8-4 overall (5-3 in the ACC) final regular season record. The loss dropped Syracuse to 4-8 overall (2-6 in the ACC) to close out their season.

While offensively it seemed like an impressive display by both teams, it was really a case of two really poor defenses playing each other. A time for both teams to evaluate the defensive staff and talent as the 2016 regular season concluded.

The Pitt and Syracuse defenses combined to give up 1291 total yards in the game. 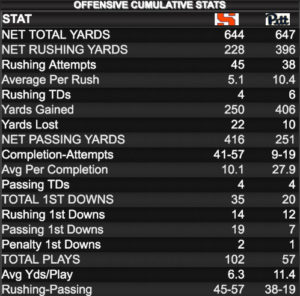 The high scoring affair started on the second drive for each team.

After both teams traded punts, Syracuse marched down the field and finished the drive when back-up junior QB Zack Mahoney ran it in for a 2 yard score. Mahoney had an amazing day of 43 of 61 passing for 440 yards, 5 TDs and 1 INT.

As would be the case all day, Pitt wasted no time to tie the score.

After the Orange punted again, Peterman threw an interception that was intended for true freshman WR Aaron Matthews and deflected