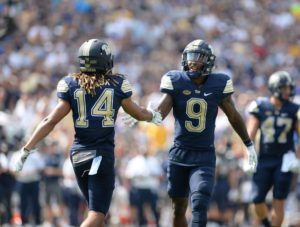 A question that I didn’t think coaches and fans would be searching for answers at mid-season still is: What is wrong with the Secondary? Simple answer, if I knew I would be a Defensive Coordinator somewhere.  The second question would be, Did I see the secondary struggling this bad? And that answer is, NO!

The secondary has been one of the weak spots on PITT’s defense over the past few seasons and with the exceptions of Darrelle Revis and K’Waun Williams, the defense really has not had a shutdown corner who deterred opposing Quarterbacks.

One reason is over the past few seasons, coaches tried to pass off Lafayette Pitts as a shutdown corner, but he still gave up too many big plays for anyone’s liking.  Now don’t get me wrong he was a solid defensive back, but he wasn’t that shutdown guy who made opposing Quarterbacks question whether or not they should throw it in that direction.

But, as last season progressed, I liked what I saw from the Secondary and had some confidence that it would continue to improve though out the off-season. Well, through 6 games, that confidence has diminished and I like everyone else am looking for answers.

Being the top recruit and leader of this secondary, Jordan Whitehead has lived up to expectations so far and still has room for improvement as he continues to grow as a football player.  Last season, Whitehead tallied 110 tackles, 7 for loss and 1 Interception.  So far this season, he has 37 tackles and 1.5 for loss.  The numbers so far this season may not look impressive, but when I watch the games whether from the stands or on TV, the secondary just looks more relaxed with Whitehead on the field.  But with Whitehead playing some offense, and I want to see him be used on offense, you need to have faith that your secondary can get it done when he is on the sideline getting a break.