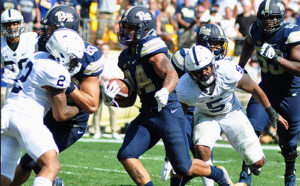 That was the situation for the Pitt Panthers after they beat in-state rival Penn State en route to a 42-39 thriller at Heinz Field in Pittsburgh, PA this past weekend.

In front of 69,983 people, the largest attended sporting event in Pittsburgh history, the game itself didn’t disappoint.

It all started after Penn St punt following their opening possession. Pitt took over on downs and scored on a 10 play, 99 yard drive that ate 4:33 off the clock.

Pitt senior QB Nate Peterman pushed the ball out of the endzone for 2 yards before Player of the Game and local hero redshirt Junior tailback James Conner blasted up the middle for 24 yards. After Conner was stopped for no gain, sophomore wide receiver Quadree Henderson took a jet sweep carry 38 yards to the Nittany Lions 44 yard line.

Henderson then scampered 9 more yards before Conner broke more tackles on his second run, this time for 23 yards. Peterman then shovel-passed to senior tight-end Scott Orndoff for 10 yards. Conner inched the ball closer by a 1 yard before finally, junior H-back George Aston busted the final yard to pay-dirt and Pitt led 7-0 after its first series.

Penn State got back on offense but it wouldn’t last long.