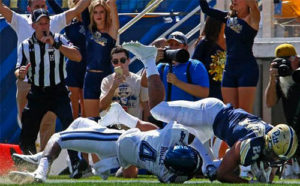 Yes, Pitt beat Villanova on Saturday. The game wasn’t pretty and all the pre-season hype regarding certain strengths of the team looked, well, pedestrian.

Ok it’s true. Pitt purposely ran a vanilla offense on Saturday as to not show Penn State too much for this upcoming weekend. And yes, it’s also true that it’s only one game and the team will improve as the season progresses.

But the overwhelming takeaway from Saturday was that Pitt isn’t as dominant upfront as previously advertised. Pitt struggled to get much of a push against a vastly inferior FCS opponent.

After the two teams traded punts to start the game, the Pitt defense made the first big play when senior Pitt safety Terrish Webb picked off an errant pass by Wildcat QB Zack Bednarczyk.

The ensuing Pitt drive resulted in nothing and the Panthers punted. Villanova returned the favor before Pitt’s punt returner sophomore Quadree Henderson finally took the resulting kick back 31 yards to the Villanova 32 yard line.

Then Pitt senior running back and hero James Conner ran hard for gains of 8, 2, 3, and 4 yards. Pitt senior QB Nate Peterman tacked on a 6 yard run then Conner finished the drive with his vintage 3 yard stiff arm and Pitt led 7-0.

Again though, despite Villanova stacking the box, Pitt struggled to gain much of a push throughout the drive and it wasn’t just because they were outnumbered.

Villanova punted two more times in the first half and Pitt was also stopped before adding more points before halftime.

This opened a 9 yard pass completion to Jester Weah, his first ever career catch as a Pitt Panther.

Conner then bulldozed for 9 more yards which led to Peterman hitting senior TE Scott Orndoff for 11 yards. Peterman finished the drive off by hitting Conner at the goalline for an amazing 9 yard TD catch with at least 3 Wildcat defenders on the