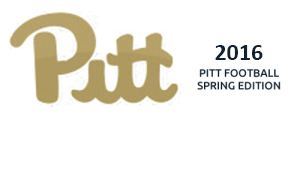 The first season (2015) for Pitt Football Coach Pat Narduzzi started out fabulously. Before the season finale, Pitt stood at 8-3 with wins over Ga Tech, Duke and Louisville and a top 25 ranking. By the season’s end, it ended with a thud. Pitt lost at home to a mediocre Miami team and a one-dimensional Navy team in the Military Bowl to finish 8-5.

Meanwhile, Pitt freshman tailback Darrin Hall went from rising superstar against the Canes (12 carries for 103 yards and 1 touch) to not needed back-up against the Midshipmen (3 carries for 2 yards). It doesn’t help that Pitt was so far behind most of the game to even bother running the ball.

Defensively, Miami exposed Pitt’s poor pass rush and watched Brad Kaaya throw for 235 yards with 21 completions on 35 attempts and a TD. But worse, Navy’s Keenan Reynolds threw 9 for 17 and 126 yards on top of his 24 carries for 144 yards and 3 TDs. Midshipmen tailback Chris Swain also added 27 carries for 114 yards.

In sum, Pitt’s defense lacked the speed to cover most of Navy’s quick draw plays and counters.

However, help is on the way. Pitt had a tremendous 2016 recruiting class, particularly on defense, that should fill a lot of holes. The talent will be young and inexperienced though and thus Pitt will be forced to stick with a lot of the returning letterman for the 2016 season.

A light sample of that recruiting class will see the field during the 15 Spring football practices this month. Here’s a quick preview of what to expect.

QB – Returning 5th year starter Nate Peterman will naturally take snaps with the first team offense. Peterman usurped the job from previous starter Chad Voytik (who later transferred) and had a solid 2015 season sans the Miami and Navy games. He completed 193 passes on 314 attempts with 20 TDs and 8 INTs. That was good for a 138 QB rating.

Battling for the back-up job will be redshirt