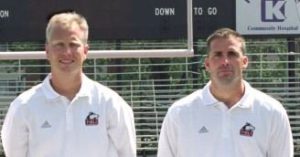 If we would have just looked a little deeper in Narduzzi’s bio. We would have noticed from 2000-2002 coach Narduzzi and Matt Canada were on Joe Novak’s Northern Illinois staff. Following the 2002 season Narduzzi became defensive coordinator at Miami of Ohio. The two young coaches parted ways, but kept tabs on each other’s careers. 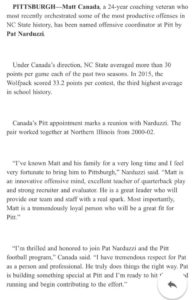 So besides a common employer with Pat Narduzzi what makes Matt Canada a fit at the University of Pittsburgh? To start I look back Canada’s time before NC State. Prior to arriving there he replaced none other than Paul Chryst at the University of Wisconsin on Bret Bielema’s 2012 staff. This means he’s already in his career adapted a system to fit a Paul Chryst/Wisconsin-type roster. The majority of our juniors and seniors with the exception of transfers is made up of Chryst’s offensive recruits. Prior to Wisconsin playing in the Rose Bowl, Bret Bielema accepted the Arkansas job.