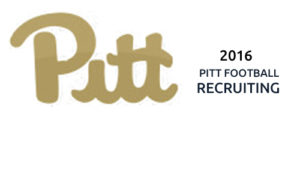 February 3rd, 2016 will be the culmination of 14 months of the Pitt football staff’s recruiting efforts. Phone calls, texts, direct messages, letters, school visits, in home visits, unofficial visits and official visits.
All those tools in the arsenal used to “sell” what Pat Narduzzi and Pitt have to offer.

This 2016 class will attempt to address depth issues and previous staff recruiting misses across the roster.

One thing evident is this coaching staff covets position flexibility. Numerous players out of the nineteen commitments to date have the ability to play multiple positions. The impact Jordan Whitehead made as a freshman safety is proof to recruits that if you can make plays on offense or the return game you’ll be given the opportunity to do so.

DEFENSE
Looking at Pitt’s 2015 defensive statistics one can see DC Josh Conklin generated as much pressure on opposing QBs with the linebackers and secondary as he did with the front four defensive linemen. In order for the pass rush to result in sacks the coverage behind it must hold up. The synchronization of the two is where Pitt’s secondary got exposed in games vs mobile QBs. The emphasis on secondary and speed edge rushers in the 2016 class show the staff is addressing these roster shortcomings.