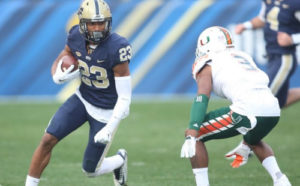 Much like the other true tests for the 2015 Panthers, Pitt got blown out in the first half and couldn’t muster enough of a comeback in the second half to win in a 29-24 season finale loss to the Miami Hurricanes at Heinz Field in Pittsburgh.

As was the case in games against Iowa, Notre Dame and North Carolina (all losses), Pitt got beat up front against the Canes and was clearly outclassed talent-wise in most key positions on the field.

Miami wasted no time on its first series.

Canes sophomore QB Brad Kaaya missed his first pass but then handed it off to sophomore tailback Joseph Yearby for 4 yards. Kaaya then found redshirt senior WR Rashawn Scott for 7 yards before handing it back to Yearby who lost a few yards and then burned Pitt for 35 yards to the Panthers 5 yard line.

Yearby tacked on 4 more yards to the Pitt 1 yard line and then Kaaya, after 2 more previous failed attempts, punched it home for a questionable 4th down goaline touchdown. Miami led Pitt, 7-0.

Pitt’s offense came out sluggish and unprepared in response.

The Hurricanes went back on offense and in just 2 plays scored again.

Kaaya first connected on a deep pass to junior WR Stacy Coley for 48 yards to the Pitt 22 yard line. The Panthers secondary failed to find the football in the air once again.

After the teams traded field goals, Miami would tack on an additional