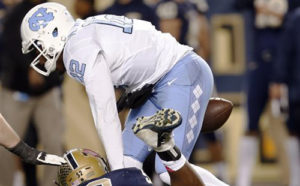 The North Carolina Tar Heels scored on each of its first 4 possessions en route to a 26-19 win vs Pitt at Heinz Field in Pittsburgh.

It didn’t take long for the Tar Heels to go to work but once they did, Pitt couldn’t stop them.

UNC Senior QB Marquise Williams looked poised and confident all night starting with a short run of 3 yards. He then found fellow senior WR Quinshad Davis for a 6 yard pass and then handed it back to Hood for 3 more yards.

After the Panthers missed a field goal on its next series, Pitt QB Nate Peterman connected with sophomore tailback Chris James on a short 5 yard pass. Peterman then threw an 8 yard strike to junior WR Dontez Ford, who was subsequently stripped of the ball by Tar Heels redshirt sophomore safety Donnie Miles. The fumble was eventually recovered by UNC Defensive End Junior Gnonkond at the Pitt 38 yard line.

Williams went back onto the field and ran 6 yards to the Pitt 32. He then tossed an easy pitch and TD catch by UNC junior WR Mack Hollins who then waltzed into the end zone untouched. Just like that, North Carolina led Pitt 20-3.

After the teams traded field goals, Pitt tried to make it interesting in the 2nd quarter.

After a Peterman incompletion, James got things going with a 4 yard run. Peterman would add an 8 yard run of his own before connecting with senior Pitt Tight End JP Holtz on a 16 yard pass.

Pitt superstar junior WR Tyler Boyd then went into the wildcat and ran it 6 yards. James would tack on two more runs of 1 and 2 yards flanked by 10 yard run by Panther redshirt freshman Qadree Ollison.