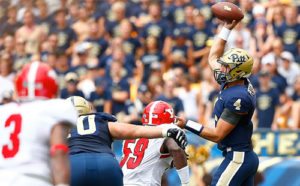 Another year, another debacle for the Pitt defense. Despite the shortcomings, the Panthers were able to eek out a 45-37 victory over FCS power Youngstown State at Heinz Field yesterday 45-37.

When new Pitt Head Coach Pat Narduzzi accepted the job in the off-season, it was clear to him following the huge collapse against Houston in the Armed Forces Bowl last year that this would be a major rebuilding job.

This was evident on the very first Youngstown State series. After Pitt failed to convert a first down on its first possession, the Penguins faced 3rd and 13 following Pitt’s Tyrique Jarrett sack of QB Hunter Wells. A couple of plays later, Wells hit YSU WR Jody Webb for 19 yards to the Pitt 29. The Panthers looked lost in their assignments.

In a game that featured Narduzzi’s first game as a head coach and long-time rival Bo Pellini first game as Youngstown State’s head coach, YSU RB Martin Ruiz ran 23 yards to the Pitt 6 yard line on a very simple play. Both Narduzzi and Pelini faced each other in high school and had coached against each other for years in the Big Ten.

Nonetheless, Pitt’s defense then stopped a few very bad play calls up the middle and and the Penguins settled for a Zak Kennedy 22 yard field goal. Youngstown State led 3-0.

With Pitt stud WR Tyler Boyd out of the game due to suspension, Pitt stud RB James Conner then answered right back. First, QB Chad Voytik found “the Hammer” Conner out of the backfield for a 7 yard screen pass. After the Hammer ran hard for 7 more yards, he then made quick work of the Penguin defense and tote the rock 40 yards to the Youngstown State 13 yard line. A play later, he stiff-armed a Penguin defender for a 13 yard Pitt touchdown. Pitt led 7-3.

The Panthers forced the Penguins to punt on their second possession, then Narduzzi decided to play musical chairs at QB and put back-up Nate Peterman in the game. Peterman