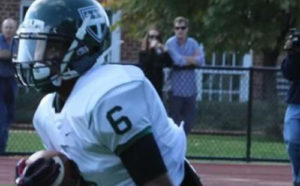 Pitt has added a number of quality walk-on candidates from Western Pennsylvania. The majority of these athletes grew up rooting for the Panthers and the history of the program. Pitt’s latest preferred walk-on, hard hitting Richmond (VA) Trinity Episcopal defensive back Rimoni Dorsey (6-foot, 185 pounds), knew a lot more about the head coach than the Pitt program.

“Coach Narduzzi was recruiting me at Michigan State. When he accepted the Pitt job, I didn’t hear from him for a while. I got a little nervous. Once he got his staff in place, he started making calls and we reconnected,” said Dorsey. “He told me he wanted me to come to Pitt as a preferred walk-on. Pitt had scholarships to give and it was a great opportunity for a walk-on because the staff still really didn’t know any players. It would be an opportunity for me to display my ability with a new staff in place.”

Dorsey led his team in pass breakups while picking off four passes. He regularly was pitted against the opposition’s best receivers. Rimoni helped the Titans win their 1st state championship with 2 interceptions in the championship game and four pass breakups. He has played both safety (sophomore year) and cornerback (junior year). Dorsey stated he’s ‘wide open’ as to the position he plays at Pitt. “They told me they want to evaluate me and move me to either corner or safety,” said Dorsey. “I’m fine with that.”

“I visited Pitt and loved it. I had a great conversation with (Pitt cornerbacks coach) Renaldo Hill. He’s a great coach and I believe he will make me a better player. Coach Hill and Narduzzi told me they love my film. I just knew Pitt was the place for me athletically and academically.”

When asked about his strengths as a defensive back, he stated, “I’m a complete defensive back. You have some that are cover corners. Others want to protect the run. I feel like I can do both. I do everything well. I love to press. I like to get my hands on a receiver