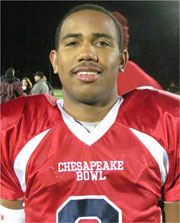 Notes: Riley was a Baltimore Sun second-team all-metro selection at defensive back his junior season. He was invited to and participated in the U.S. Army Junior National Combine in San Antonio, Texas, in January of 2011. As a sophomore, Riley saw action at cornerback, safety and wide receiver. He also returned punts.

Riley was named first-team all-metro by the Baltimore Sun in 2011. He earned the honor for his play at defensive back.

Chris Coleman's Scouting Report: Donovan Riley is a very smart football player who comes from a very tough academic school, Baltimore-Poly. He has a college ready body already, at about 6-0, 200, and his obvious intelligence could make him a potential candidate for early playing time in Bud Foster's defense. His biggest challenge will be adjusting to the speed of the college game, as it is with most players making the jump from high school. I project Riley as a short-side safety in college, or a rover in Virginia Tech's scheme. I like him as a player, and I'm a bit surprised that he didn't have more offers (Vandy and UConn were his others). He'll probably get more offers later in the summer, but I expect him to stick with his Tech commitment.