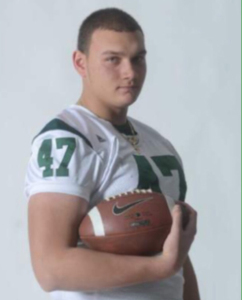 Growing up in Penn-Trafford, Chris Stanford (6’4” 270 lbs.) has always been a Pitt fan. He even says, “I’ve loved Pitt ever since I was born. Stanford plays Defensive End for the Warriors and his play during his junior season has the hometown team interested in his abilities at the next level. Recently, Stanford attended Pitt’s Junior Day and Dreambackfield.com caught up with him to discuss the visit and his thoughts on his hometown school.

“Coach Powell came to my school about three weeks ago. He told he saw my film and said ‘I’m a dominant player’ and that they wanted me to come to their Junior Day.” The Junior Day was held February 14th and it was highlighted by a big upset win for the Men’s Basketball team over 12th ranked North Carolina.

“We met at the South Side complex and met all of the new coaches. I work out with Robert Hainsey (2017 Gateway OT) and I know Billy Kisner (2016 Penn Hills ATH) so I was talking to them. The coaches showed us a video and then we loaded a bus and headed for The Pete,” Stanford said. Needless to say with a top-25 ranked ACC opponent and a day filled with potential future Panthers, the Oakland Zoo was a major force during the game. “The student section was crazy. They had signs saying ‘Commit to Pitt’ It was a huge win for us.”

Head Coach Pat Narduzzi was a main focus for the fans and recruits as well. Stanford said, “Coach Narduzzi was looked at like a God. Everybody was rooting for him and he’s going to turn this program around. He just seems like a cool guy.” Stanford already has a connection with Defensive Line Coach Tom Simms. “I knew him from his time at Youngstown State so I know him pretty good.”

At the moment, Stanford has no offers, but he does have a good number of schools showing him some interest. Those schools are: Arizona, Boston College, Eastern Michigan, Old Dominion, Temple, Toledo, Villanova, Wake Forest, and Youngstown State. He has a good idea of when he is taking visits to all these schools as well. “I’m going to Boston College on April 1st. I’ll be visiting Nova and Temple during the same weekend since they’re close. I want to get out to Arizona at some point. It’s a long way but my coach said if I go, they’ll offer. Plus, I’ll go to Old Dominion in March or April. I might visit Toledo and Wake Forest. I’m going to go to all their camps too,” Stanford said.

While Stanford is looking into schools, he makes it a point to see the area around a school. He also wants to see how the campus is, whether it is a small campus or a city campus, not to mention the academics. Stanford, who is still undecided about a major, said that he is big into United States history and would like to be a Social Studies teacher.

Going forward, Stanford says, “I’m going to camp this summer and make a name for myself.” In college, playing time would be a big thing. He says, “Playing time is big for me. If I get redshirted, yeah that’s cool. But if I were to sit the bench for a year or two I wouldn’t like that. I want to play, I hate coming out for one play in high school. I want to go somewhere I can play and feel comfortable.”

As for the hometown Panthers, they are in a good place with Stanford. “I love Pitt. I would definitely like to be a part of it. I’ve been a diehard fan since I can remember. Everybody at PT knows I’m the biggest Pitt fan around here and its right down the street. My mom wants me to stay home but I wouldn’t mind going to school ten hours away if it came down to it.”

Do not look for any kind of commitment from Stanford for a very long time. He says that he will not commit to a school until after his senior year.