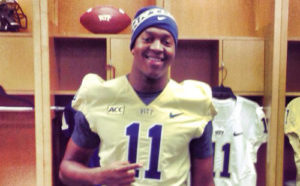 There are times when patience in the recruiting process can pay off.  Under the radar players enter their senior seasons with little fanfare then explode onto the scene.  Pitt Head Coach Paul Chryst and staff badly needed an infusion of talent in the linebacker corps.  They found a late blooming gem in Cocoa (FL) linebacker James “Jay” Folston.

“It really feels good to officially be a Panther and get the process over with.  Now I can focus on training and doing everything I can to succeed at the next level,” said Folston.  “Pitt was my first offer and that had an impact on me.  It told me they wanted me.  Pitt’s the right place for me.  I was comfortable there.  It felt like home.”

Folston comes from talent rich lineage.  His father, James Folston Sr., was the second round pick of the Los Angeles Raiders and played eight seasons in the NFL.  Jazzmine, his sister, signed a letter of intent with TCU’s track and field team.  Tarean, his brother, plays running back for the Notre Dame Football team.  James flew to Pittsburgh last November to watch the Pitt-Notre Dame matchup.

Folston was the leading tackler for Cocoa High School, a Florida Class 4A school.  He totaled 108 tackles, 6 tackles for a loss, 2 sacks and 2 fumble recoveries.  James led his team to an 11-2 record and the semifinals of the Florida Class 4A state playoffs.

“My brother Tarean is getting ready for my freshman year at Pitt,” he said.  “He’s giving tips on training and telling me what to expect for training camp this summer.  It’s great to have someone like that to learn from.”

“I will bring a lot of athleticism to the field.  I’m fast, physical and I can drop into the secondary to cover as well.”

“I want to help bring more players from the state of Florida to Pitt,” said Folston.  “I know the coaches have been down here scouting.  There are a few players from Orlando, FL they may be offering.  There’s a lot of talent down here and I want to get some it up in Pittsburgh.”

“I’m excited about the future.  When I visited, I was up there on my own.  I can’t wait to meet some of my future teammates.”