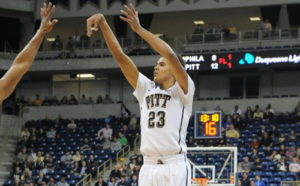 The NCAA has finally cleared Damon Wilson Jr. following an investigation into his final two High School seasons. His eligibility was in question because during the last two seasons of high school basketball he played at the Long Island private school, Our Savor New American, which is under investigation by the NCAA.

This is great news for Dixon, since his backcourt has had some major question marks due to health and depth problems. Wilson is an ESPN top 100 recruit, who has the type of combo guard skillset to play either the point or shooting guard. Now with no looming eligibility problems he can just focus on finding his role with the team. As well, Dixon no longer has to worry about if he can count on him to be there by season time.

What makes Wilson’s case even more intriguing is that three of his high school teammates have not met with the same fate as him. Former teammate and Kansas freshman Cheick Diallo has yet to be cleared. As well, St. John’s freshman Kassoum Yakwe and Kobie Eubanks have been declared ineligible.

The Panthers open the 2015 regular season up in Okinawa, Japan against an uber talented Gonzaga squad. Dixon will need every possible piece of his rotation if he expects to pull the upset, which is why the Wilson news is a much-needed sigh of relief.