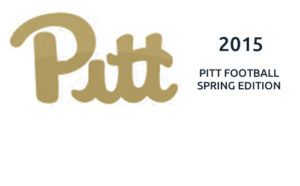 One of the best things Coach Pat Narduzzi and his staff have brought with them to Pitt is relentless and much needed competition. This competition has begun to manifest itself in a few different forms. In this edition of the Pitt Spring football series, DreamBackfield will take a quick look at 3 examples of this exciting new brand of competition. These elements and drills are creating a breathe of fresh air into the team. Lets take a look at the things the staff has installed into the Pitt football program.

Narduzzi has made it very clear that moral victories are not victories at all. Nothing has made this more apparent than naming one side of the ball victorious at the end of each practice. To the winner goes the blue jerseys and these jerseys are becoming a merit of high respect these days. Each side of the ball is fighting very hard day-in and day-out to be bestowed the honor of wearing the blue jerseys at the next practice. The blues are creating competition and ensuring that in every practice guys are giving it their all.

The one-on-one tug of war battles are also new, competitive, and good for player confidence as well as overall team morale. These battles are just another example of keeping the competitive juices flowing at all times. Not only do drills like the aforementioned keep the young guns competing, they also aid in ensuring the players focus on self-improvement.

The last element Narduzzi has created is fear. By shaking up things and changing the depth chart around on a consistent basis, no one can relax or slack off. Any attempt to rest for a practice or accept mediocrity will possibly cost a Pitt player a starting job. This is not only awesome for motivating the entire team, it also gives kids who otherwise wouldn’t have a chance the opportunity to showcase their skills.

Narduzzi has sent a pretty clear signal – the best man at each position will play on any given week. If for instance a third teamer steps it up, while the starter slacks off, and the second stringer shows little effort you can be rest assured the third stringer will get some playing time. The cream will rise to the top so to speak, and Pitt will improve in all aspects due to these tactics. Panther faithful should be very happy to hear this and very confident that improvement on the field will be coming soon.