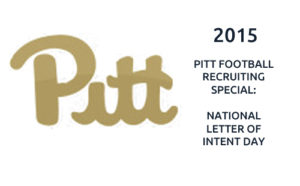 The 16th recruit
Very little occurred last weekend until the news broke that 6-foot-2 220 pound University of Tennessee quarterback Nathan Peterman visited Pitt and committed to transferring to Pitt. He will have two season of eligibility to play and is able to play immediately. Peterman played in 11 games over the past two seasons, starting twice. He completed 20-of-43 passes for 94 yards and threw two interceptions for Tennessee. The former four-star quarterback provides quality competition for starter Chad Voytik and a battle-tested quarterback to the Panthers roster. The significance of this transfer can’t be overlooked.

The local quarterback
When quarterback Alex Hornibrook opted to follow former Pitt head coach Paul Chryst to Wisconsin, Coach Narduzzi sent new offensive coordinator Jim Chaney on the hunt for a new signal caller. He didn’t have to look that far. One week later he met with and worked out 6-foot-3 inch, 200 pound Pine-Richland quarterback Ben DiNucci. Chaney offered him a scholarship shortly after. DiNucci was the Pennsylvania AAAA player of the year and set a state record this past season with more than 4,000 yards passing. Despite his many accolades, he received little to no attention from the Power 5 conferences. Shortly after his official visit to Pitt, he chose to flip from Ivy League University of Pennsylvania and commit to the Panthers. If the Panthers are going to gamble on a late addition quarterback, they chose wisely. DiNucci’s highlight film can be summed up in one word: FUN. Yes, he has an unorthodox throwing technique, but he’s highly athletic, accurate and his he has above average arm strength. DiNucci has the tools to develop into a top flight quarterback. He will be red-shirted and have ample time to work on his footwork and throwing motion.

The secondary
Pitt added four defensive backs to the class: Monaca (PA) Central Valley cornerback Jordan Whitehead, Coatesville (PA) safety Jay Stocker, Coraopolis (PA) Quaker Valley cornerback Dane Jackson and Hallandale Beach (FL) cornerback Malik Henderson. Whitehead and Stocker were the top rated players at in the state of Pennsylvania at their respective positions. Pitt’s young and thin group of cornerbacks will receive immediate help from Whitehead. He’s an elite ‘blue-chip’ talent considered one of the top 100 players in the nation. There’s little doubt that he will push for a starting position from the first time he takes the field. Don’t be surprised if you see Whitehead gaining playing time on offense and special teams as well. He’s simply magic with the ball in his hands. Stocker was the first player to officially commit to Narduzzi. He had accumulated 18 scholarship offers. New Pitt defensive coordinator Josh Conklin is looking for physical, downhill players. Stocker is the prototype. He’s a 185 pound safety that hits like a 220 pound linebacker. The Panthers have depth at safety but I expect he will push for early playing time. Jackson was a vastly underrated and under recruited prospect. His lack of attention from college recruiters continues to baffle me. I fully expect Jackson to turn into an exceptional cornerback for the Panthers. He simply needs time in the weight room (he’s a thin 170 pounds) and increased reps at the position. I had a conversation with former Pitt cornerback coach Hank Poteat. I asked him about Malik Henderson. His eyes lit up and he proceeded to tell me he was rare in that he was a player with extensive knowledge of the cornerback position. Henderson has a close friend that plays cornerback for the Cincinnati Bearcats. He would often work with him on advanced techniques. Poteat felt Henderson had the ability to quickly throw himself into the mix and compete. The only thing holding him back would be his lack of ‘college size’. A year in the weight room would rectify that issue.

The Linebackers
Pitt needed linebackers and Coach Narduzzi and staff landed two top flight players in a short amount of time. Pitt didn’t land a pair of last minute projects, the landed a formidable pair of linebackers that had a myriad of scholarship offers. Columbus (OH) Marion Franklin outside linebacker prospect Anthony McKee looked to be going elsewhere until Coach Narduzzi landed the Pitt job. McKee long admired the Michigan State defense and his commitment to Pitt was largely due to Narduzzi. McKee is roughly 200 pounds and he will need to be redshirted to gain weight. He’s exceptionally fast and a hard hitter. Look for great things from him in the future. Paramus (NJ) Paramus Catholic linebacker Saleem Brightwell is arguably the best recruit in the class next to Jordan Whitehead. He’s the personification of everything Narduzzi, Conklin and new linebackers coach Rob Harley are looking for. Brightwell is a physical, athletic and has a great nose for the ball. I believe he could benefit from a redshirt but it wouldn’t shock me if he impressed the staff enough to see playing time as a true freshman.

The Wide Receivers
What a fun group! Pitt added three receivers: Spring Church (PA) Apollo Ridge Tre Tipton, Wilmington (DE) Alexis I Dupont Quadree Henderson and Mansfield (TX) Legacy Gentry Ivery. Tipton and Henderson could be dubbed, ‘Thunder and Lightning’. Tre was one of the most versatile athletes in the WPIAL. He played quarterback, rushed for over 1,000 yards and caught 25 passes for 475 yards. Tipton chose the Panther over Michigan State. When he joins the Pitt football team, he will finally have the luxury of focusing in on one position (very similar to Dane Jackson). I expect him to be a playmaker in the future. If Tipton is thunder, no doubt Henderson is lightning. Unlike the towering receivers coveted by Paul Chryst, Quadree is a diminutive speedster that’s a human highlights reel. He will be a strong complement to some of Pitt’s larger receivers and will immediately factor into the return game. Henderson was a highly sought after prospect with scholarship offers from Nebraska, West Virginia and Clemson. Pitt fans should be highly appreciative of both wide receivers. Not only have they never wavered on their commitment to Pitt, they regularly discuss their love for the program and school on social media.

When I spoke with Mansfield High School head football coach Chris Melson, he didn’t mix words about Gentry Ivery. “I have coached 24 years and he’s the best receiver I have ever coached,” stated Melson. He added, “TCU’s leading receiver is a freshman from our high school named Josh Doctson. He’s a better prospect than Josh.” Who can argue with that? Ivery is a fascinating late addition to the class. He has size (6-foot-1 inches, 205 pounds), speed (4.42 forty-yard dash) and he dominated against competition in the largest classification in Texas. Ivery led Texas District 14 in receptions (42), yards receiving (586) and touchdowns (9) last season as a senior. I had to ask the obvious question to Coach Melson, ‘Why didn’t’ he accumulate dozens of scholarship offers?” Coach didn’t hesitate to answer the question. “There’s a report that he ran a 4.7 forty-yard dash. That’s a joke. He ran that as a freshman at the NIKE camp. I recently clocked him at a 4.42 forty-yard dash, “said Melson. “I have been shocked at the coaches that don’t do their homework. Some have skipped over him because of a time that was three years old. If you watch his highlight film, he scored a ton of points and nobody was able to touch him.”

Coach Melson added, “We had a team that ran the ball 90% of the time last season. Heading into this season, he decided to throw because of Ivery’s talent. He dominated this season. Sometimes we simply had to throw him a quick screen and let him go. He’s like a pedigreed tailback with the ball in his hands. He’s big, strong and elusive.”

Coach Melson was adamant that Pitt got an absolute steal. Recruiting outlets have referred to him as a project. Only time will tell. It’s hard to ignore his senior year production and his impressive highlight reel. Pitt fans have to be quite excited to get back into the talent rich state of Texas.

Pilato is a large and athletic lineman that projects as an offensive tackle. How athletic is big Tony? He was a standout basketball player, gliding up and down the court at nearly 300 pounds. Pilato chose Pitt over a number of Big Ten and ACC scholarship offers. At 6-foot-7 inches tall, he has the frame to add another 20 to 30 pounds. He will greatly benefit from a year in the weight room. A pair of offensive linemen was sufficient for the 2015 class. It’s nice to see that both were located in Pitt’s backyard.

The Pass Rushers
Pitt was in dire need to help at the defensive end position. They added one player that will provide immediate help is Franklin (MA) Dean JC Allen Edwards. Pitt’s pass rush was nothing short of horrific last season. Coach Narduzzi was looking for a mature player that would immediately push for playing time. They found that player in Edwards. The 6-foot-3 inch, 250 pounds physical specimen has 13 ½ tackles for a loss and 8 sacks in 10 games last season. He was named first-team All-Northeast Football Conference. Although he was lightly recruited, Pitt’s new coaching staff had nothing to lose. His highlight film from last season was impressive and he appears to have a bit more athleticism than most of the defensive ends on the current roster.

The next James Conner?
Youngstown (OH) Austintown Fitch HS running back Darrin Hall Jr. is a four-star running back that chose the Panthers over buffet table of scholarship offers from Power 5 conferences. A big back (6-foot tall, 210 pounds), he’s known his physical and punishing north-south running style. “I like to go downhill. I’m not pretty, but I get the ball in my hand and go,” he said. “If I have to, I can go side to side but my preference is to go straightforward and break tackles. There’s something special about knocking someone over and gaining that extra yard.” Hall has battled several injuries and he will greatly benefit from a redshirt. Ranked one of the top ten prospects in the state of Ohio, Pitt was fortunate to retain his services. Coach Narduzzi was his primary recruiter at Michigan State and the Spartans were a close second for his services.