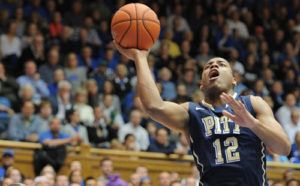 The Pitt Panthers dropped a must win game at Virginia Tech 70-67 in OT. With the loss the Panthers dropped to 3-5 in the ACC and 13-8 overall. The NCAA tournament berth was already on life support may have died last night in Blacksburg. The win was the first for Virginia Tech in ACC play. VT guard Adam Smith scored 26 points including the game tying and game winning three point shots.

Pitt started the game shooting the ball pretty well and playing solid defense and took an early 11-5 lead. James Robinson picked up an early second foul and was sent to the bench. He took the Panthers offense with him. The Panthers offense really struggles when Robinson is out of the lineup. Josh Newkirk has all the talent in the world but sometimes plays too fast. The game needs to slow down for him and it will with more experience. The Panthers trailed 29-24 at the half.

The Panthers got another solid performance from Jamel Artis who scored 17 points and had 9 rebounds. Michael Young was not much of a factor until late in the game contributing 6 points and 10 boards. Cameron Wright who struggled early in the game had to leave the game with a dislocated pinky finger that trainers had to pop back twice. After the injury, Cam seemed to respond and Pitt played well taking a 60-53 lead. The Hokies ended regulation on a 9-2 run to tie the game at 62. The Panthers outrebounded Virginia 45-34 but missed a crucial rebound in the final seconds of regulation that lead to the game tying three. Adam Smith game tying three was from about 24 feet away.

In overtime the Panthers missed three free throws and only made two field goals. Once again Adam Smith hit a long range three to give the Hokies a three point win. James Robinson’s three attempt try to tie the game fell just short.

The Panthers once again gave up easy penetration to the Virginia Tech guards and the Hokies had several wide open three attempts. Virginia Tech shot 12-27 from the three point line while the Panthers where held to 4-11 from beyond the arc. It was the second time in three games Pitt gave up more that 11 three pointers.

Aron Phillips-Nwankwo fell hard on his left shoulder in the first half and did not return to the game.

Derrick Randall saw some action and scored his first 2 points in ACC play.

Pitt host #8 ranked ND on Saturday at the Pete