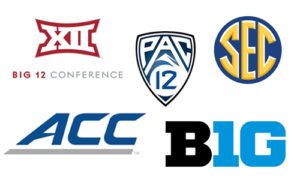 As Forrest Gump once famously quipped “Life’s like a box of chocolates. You never know what you’re gonna get.” Extending that metaphor to college football conference realignment, the situation couldn’t be summarized any better.

Tomorrow, July 1, 2014, twelve institutions will change conference affiliation in the FBS. For those who have lost track the list is as follows:

For Pitt and long-time peer institutions Syracuse and Notre Dame, tomorrow marks 1 year since making the switch from the Big East to the ACC. For those schools, the move has been rather successful. Pitt took home roughly $17 million in revenue in its first year in the league. The money will not be saved however.

This summer, both the Men’s and Women’s basketball team facilities inside the Petersen Events Center will be renovated. The Pitt football weight room on the South Side will also be expanded.

But the financial benefits aside, Pitt, Syracuse and Notre Dame have been competitive in their first year in the conference. Pitt grappled a Wrestling regular season *title (VA Tech won the ACC Wrestling Conference Tourney) and the Pitt men’s track and field team also won the 2014 IC4A Championship for the first time in nearly 75 years. Syracuse won the Men’s Cross-Country title while Notre Dame grabbed the Men’s Lacrosse title in their first year in the league.

Likewise, West Virginia just recently netted $14 million (67% of its share) in its second year as a member of the Big 12 Conference since moving from the Big East. That number is expected to reach $40 million, however, by the tail end of its TV contract. The Mountaineers also managed to win four Big 12 conference titles, most notably in women’s basketball since it began Big 12 competition.

For Rutgers and Maryland, though, the lure of the big TV contract money was far more vital than competitive play on the field. Both schools athletics departments are deeply in debt and gladly accepted the Big 10’s membership invite two years ago. Yet the question remains whether the Scarlet Knights or the Terrapins will be remotely competitive in the league. Rutgers would be ranked dead last in the Big 10 in the 2014 Director’s Cup Standings, which is the trophy given the school with the most championships in all sports.

Rutgers couldn’t manage to capture a single regular-season or conference tournament title in any sport (men or women) this past year.

In contrast, Louisville comes to the ACC on extremely strong footing. Armed with a trunk full of cash (nearly $100 million at last check with only $11 million of it subsidized), the Cardinals are extremely competitive in most sports (ranked 30th in the Director’s Cup Standings) and a welcomed addition to the ACC despite its academic shortcomings.

For the remaining schools making a conference switch tomorrow, they are all racing to capture a piece of the incredible holy revenue grail that is college football. While many fans bemoan the long-time bitter rivalries that college football realignment has destroyed, none of the schools making the move thought twice about staying put and missing out on a possible pay-day increase. Or worse yet, being left behind.

Every school has the dream of football glory despite the fact that so few teams actually realize it. The entire college athletics landscape has been reduced to tv markets and college football and like a comet, nothing’s going to stop its destructive path.