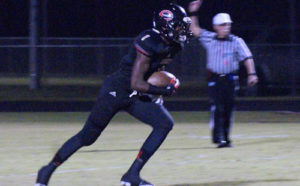 Creekside (FL) High School Wide Receiver Rashad Blunt (6’2” 190 lbs.) may have only been in contact with Pitt for the past month but he has had watched Pitt for a while.

Dreambackfield.com caught up with the 2015 wide out to speak about his offer, his summer plans and a great organization that he is a part of.

As mentioned previously, Blunt has watched Pitt for a good while. “I’ve always watched Pitt a lot. They’re on TV quite a bit. One of my favorite Pitt players was Dion Lewis because I wanted to play Running Back but I grew up watching Pitt.”

As a junior at Creekside, Blunt totaled 33 receptions for 480 yards and 11 touchdowns. However, it was a defensive coach that wanted him first. “(Defensive Backs) Coach Douglas came and talked to me and wanted to see my defense tape but I just started playing defensive back. He told me he’d pass my Receiver tape along to (Receivers) Coach Lewis. He called last week to extend an offer.”

As a receiver, there are many areas that you need to specialize in. Blunt thinks his biggest strengths are his blocking and route running. “I’m very physical with my blocking. A lot of people see me as a big receiver that just likes to run deep and get jump balls but I’m a crisp route runner. If I don’t get the route right, I keep going until it is.”

His summer plans are not like most soon-to-be seniors. Sure, he will be attending camps such as South Carolina and he’s already been to Miami but it’s a Clemson visit that is very important to him and his family. “My dad played at Clemson and he has an organization called City Streets to Student Athletes. We host a speed camp for about 200 kids a week. We select 30 of those kids to come to Clemson for a three day trip. It’s a big camp for me as well.”

With double digit offers, Blunt says “Pitt, FAU and Cincinnati are standing out.”

He has yet to visit Pitt but plans on visiting this summer. In fact, his family is currently looking at flights up to Pittsburgh so he can visit.

There is no timetable for a commitment for Blunt. All he had to say about a timetable is, “I want to be an All-State Receiver in the state of Florida and be a standout athlete at camps and bring excitement to them.”