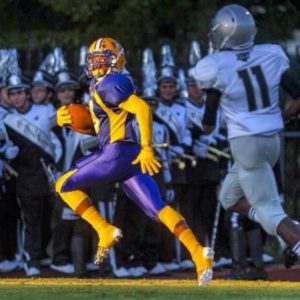 “We left our house around 4:30AM and arrived in Pittsburgh around 9AM.  It was a long trip but I had a great visit,” said Henderson.

“When we first arrived, we were greeted by (Pitt recruiting coordinator) Dann Kabala.  My family and I got a tour of Pitt’s campus.  We were able to see parts of the campus, the Cathedral of Learning and Heinz Chapel.  I visited Pitt on junior day but I wasn’t able to see any of the campus.  I got to see where the freshman dorms are as well.  I really like the campus, it was nice.”

Henderson and his family had the opportunity to watch practice and speak with head coach Paul Chryst, offensive coordinator Joe Rudolph and wide receiver’s Coach Greg Lewis.  “I really enjoyed speaking with Coach Lewis.  He was very up front with me and he’s a very funny guy.  Coach Lewis very interactive and talked about Pitt’s receiving corps.  He told me the staff likes my speed and they think I would do well in the slot.” 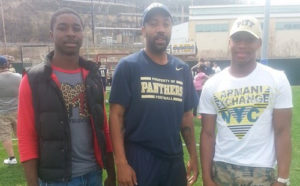 “Coach Lewis kept joking with me that he was subliminally trying to get me to Pitt.”

Henderson was asked to describe his strengths at the wide receiver position.  He stated, “I’m fast.  My speed is my main asset.  I have great vision, soft hands and strong footwork.”

Henderson was able to spend time with Pitt’s star receiver, sophomore Tyler Boyd.  Their conversation was very productive.  “Tyler told me about why he came to Pitt.  It changed my perspective on Pitt and gave me a lot to think about.”

While Boyd was doing his best to bring Henderson to Pitt, a future Panther is attempting to sell him as well.  “I know (Pitt class of 2014 tight end) Brian O’Neil.  He was supposed to take the trip with me to Pitt then something came up,” he said.  “Salesianum is only about ten minutes away from my school.  We know each other well.  Brian and I were once on the same 7-on-7 squad.”

“Brian has said Pitt’s a nice place to play football and it has a true family atmosphere.”

Henderson emphatically stated that the Pitt trip helped closed the gap on his current leader, WVU.  Pitt, WVU and Boston College are currently his top three choices.  He hopes to visit Nebraska and Ohio in the future.

“I’m going to make a final decision on September 12th, my birthday.  I’ll compare all of the schools and visits then make my final decision.  Pitt helped them with this visit.”