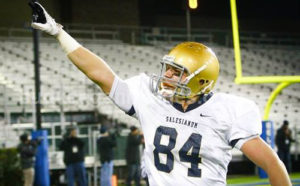 Last summer the University of Pittsburgh football program received a verbal commitment from consensus “two-star” tight end Brian O’Neill (6-foot-7 inches, 245 pounds) from powerhouse the Salesianum School in Wilmington, DE.    O’Neill was a mystery recruit to the majority of Pitt fans.  Fans had an abundance of questions about O’Neill, including, “Why was Pitt the only BCS program to offer him a scholarship?”  Is this guy a complete project?

Fast forward through O’Neill’s football and basketball seasons and Pitt fans have a resounding answer: Brian O’Neill was complete and total steal.

How much of a steal?  O’Neill led his team to an 11-1 record and the Delaware Division I state championship in football.  He was named first team Delaware Interscholastic Football Coaches Associated (DIFCA) All-State.  Brian averaged 18.6 yards per catch with 33 receptions for 614 yards and 8 touchdowns.

O’Neill remained in ‘beast mode’ heading into the basketball season.  The towering 6-foot-7 inch big man averaged 13.5 points and 8.2 rebounds in leading Salesianum (22-2) to their first DIAA basketball championship.  He was named the Boys Player of the Year for the state of Delaware.  O’Neill was informed three days ago that he will be named the Gatorade Player of the Year as well.

“I’m really glad I played basketball this year.  It helped me keep my competitive edge,” stated O’Neill.  “I was placed in high pressure situations.  We would be in the huddle and they would tell me they were going right to me to make a play.  It would come down to me against my guy and I had to make a player for my team.  It’s the same type of competitive edge you need in football.” 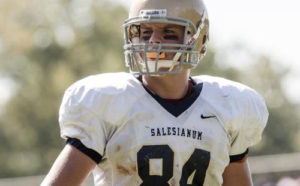 O’Neill was asked if he ever considered walking onto to Pitt’s basketball team.  He quickly replied, “I’m not going to say that hasn’t crossed my mind, especially after the last few years I have had on the basketball court.  I’m not sure how open Pitt would be the idea, but it’s something I would consider.”

While O’Neill’s participation at the Pederson Events Center is questionable, one thing is for certain, he will join the Pitt football team in June.

“I feel better about my decision now than I did when I first committed to Pitt,” he said.  “My entire class is very close.  We have a text message chain between all of us and we keep in close touch.  We plan on accomplishing big things when we get to Pitt.  It’s great to know you’re going to play a group of people you really like.”

O’Neill has wasted little time preparing for his freshman year of football.  “I’m training really hard at the moment getting ready for Pitt.  I’m hoping the work I put in right now will lessen the gap between high school and college.”

“I’m working out consistently with my teammate (Penn State commitment) Troy Reeder and focusing on the finer things.  I’m dropping a little bit of weight, working on agility and quickness.  I know the speed of the game changes in college and I want to be ready for that.  I want to focus on my explosion off the line.”

“Two current Pitt players that have been really helpful to me have been Scott Orndoff and Matt Galambos.  They have given me some great perspective on what to expect when I arrive as a freshman.  I know a bit more of what is expected of me.”

“It’s great to know from talking with the current players on the team that they are really excited about my recruiting class joining them.”

“My entire class is coming to Pitt with one thing in mind: win an ACC championship.  We want to take Pitt to places it hasn’t been.  All of us are coming with high expectation and we plan on meeting them.”

PITT fans, we want to hear from you!  Feel free to register and post on our FREE message board —– > http://chat.pittsburgh.sportswar.com/message_board/pittsports/