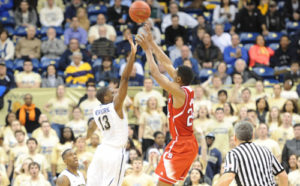 Over the past 11 seasons, Pitt has watched dominant players take over and practically score at will to sink the Panthers in critical games. Tonight was no different as small forward TJ Warren pumped in 41 points to lead NC State over Pitt 74-67 at the Petersen Events Center in Pittsburgh.

Warren was spectacular in all phases of the game but was a scoring machine as he connected on 16 of 22 shots from the floor, 3 for 5 from behind the arc and 6 for 7 from the foul line. He also had 5 rebounds, 3 assists and 4 steals to lead the WolkPack to victory. In total, he missed only 9 shots in the entire game on 34 attempts.

And once again, Warren’s performance proves that winning games in college basketball (particularly in March) boils down to scoring. These types of players haven’t suited up for Pitt since the 1980s when Coach Calipari was an assistant for the Panthers and handling most of the recruiting.

Yes, Pitt got outrebounded by NC State 35-23 and that could be blamed for the loss. But the real difference was one player, TJ Warren, and his ability to score.

Pitt had too many long droughts in the game where the Panthers were simply held scoreless and that will more often than not result in a loss.

Pitt did control the game early after James Robinson sunk a 3 pointer to put the Panthers ahead 20-14 in the first half.

Later, freshman Josh Newkirk sank one of his 5 shots from downtown (5 for 5 from behind the arc) to give Pitt the 31-21 lead. Newkirk, a Raleigh, NC native, scored a career-high 20 points to lead all Panthers scorers on 7 for 8 shooting from the field.

But the story of the night was TJ Warren. His performance was a Petersen Events Center record for points.

After trailing 36-31 at half, the Wolkpack stormed back on Warren’s shoulders. His biggest dagger came at the 13:06 mark of the 2nd half to put NC State up 48-46 and from there, the WolkPack never trailed for the remainder of the game.

Next up: Pitt now finds itself in a must-win season finale game at Clemson on Sat 3/8 at 4pm EST on ESPN3.com

Notes: Pitt honored Chancellor Mark Nordenberg (who is stepping down on August 1st and will be replaced by Patrick Gallagher) and former Pitt Panther (and potential 1st round NFL draft-pick) Aaron Donald at the game tonight. Pitt lost its 3 straight home game at the Peterson Events Center.