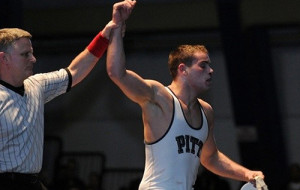 In its inaugural season in the ACC, Pitt finally grabbed a share of its first title in any sport as the #6 ranked Panthers (12-1 overall and 5-0 in the ACC) Wrestling team beat Virginia Tech (15-3, 4-2) Friday night at Fitzgerald Field House in Pittsburgh in an ACC dual-meet championship.

While Pitt still needs to face North Carolina on 2/22 to close out the ACC regular season, Pitt owns a 1 game lead in the loss column over Virginia and at worst has claimed a share of the ACC Wrestling crown.

The Panthers were led by #6 ranked Max Thomusseit (who won 7-2 against No. 17 Nick Vetterlein) and #18 ranked Nick Bonaccorsi (who won 8-3 against #20 ranked Chris Penny) in the victory.

Pitt’s best Wrestler #7 ranked Tyler Wilps got the Panthers going with a 13-3 major decision over Hokie John Dickson at 174 pounds.

After Pitt already had the victory assured, Mike Gregory wrestled at 285 instead of #20 ranked PJ Tasser. However, Gregory lost to Ty Walz, 12-10.

Next up: Pitt has two very tough meets at home against Edinboro team (2/14) and Michigan (2/15) next week at the Fitzgerald Field House in Pittsburgh, PA.