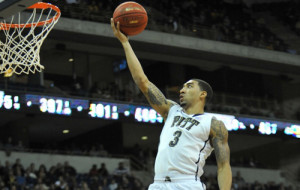 When your star player can’t shoot due to injury, you need to find your offense from somewhere else. That was the case today when Pitt beat Va Tech 62-57 in 2 OTs at the Pederson Events Center in Pittsburgh.

Lamar Patterson has been limited with a bad thumb and scored only 5 points on 1 for 9 shooting while shooting guard Cam Wright stepped up to pump in 18 points on 5 for 13 shooting to led the Panthers to victory.

On a day when Pitt announced a new Chancellor Patrick Gallagher who starts on August 1st, the Panthers offense continued to struggle for a 4th straight game and barely escaped with the win against a depleted but determined Va Tech (8-15 overall and 1-10 in the ACC) team.

The Hokies were led by forward Jarell Eddie who scored 15 points on 5 for 15 shooting including 5 for 12 from behind the arc. Va Tech also received contributions from forward Joey Van Zegeren (10 points) and guard Devin Wilson (10 points).