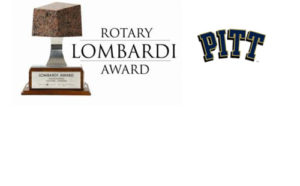 Not since DE Hugh Green back in 1980 has a Pitt player won the Lombardi Award. That all changed tonight when DT Aaron Donald won the 2013 edition.

A night after winning the 2013 Bronko Nagurski Award as college football’s best defensive player, Donald is finally getting the recognition he deserves for an outstanding senior season at Pitt which included 10 sacks, 24.5 tackles for losses, 4 forced fumbles and a blocked PAT at Syracuse.

Although Pitt only managed to win 6 games this year, Aaron Donald played lights-out football in 2013. For a kid that wasn’t highly recruited out of high school, he has represented the University of Pittsburgh with total class and has never expressed any remorse over the team’s mediocre results. If anything, Donald’s play was one the team’s true bright spots on the season.

There’s still a chance Donald could win more awards. Donald is also a finalist for the 2013 Bednarik Award and 2013 Outland Trophy, both of which will be announced tomorrow night.