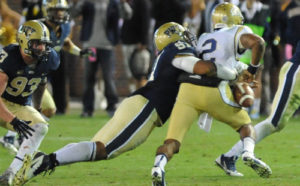 The award is given to the nation’s top defensive player in all of college football. Donald is Pitt’s first-ever recipient of the Bronko Nagurski Trophy, which held its annual awards banquet in downtown Charlotte, NC.

Donald wasn’t even selected in the 2013 ACC pre-season poll for 1st team honors but proved all the doubters wrong by not only ending up on the ACC’s 1st team defense but also winning the 2013 ACC Football Defensive Player of the Year 5 days ago.

Donald is still not done. He’s a finalist for the 2013 Maxwell Award as well.